Ministry of Environment to tackle veld fires in national parks 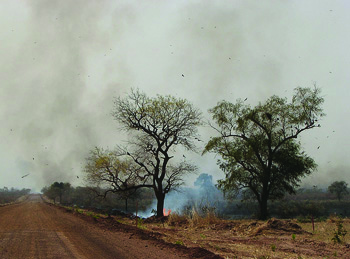 The Minister of Environment and Tourism, Netumbo Nandi-Ndaitwah, has said her Ministry has adopted measures to deal with veld fires in national parks.
Nandi-Ndaitwah said these measures include the implementation of the controlled burning programme to reduce grass biomass before the onset of the dry season and strengthening and improving the capacity of field staff to deal with hot large fires over large areas.
This after veld fires gutted an area of about 300 000 hectares in Etosha National Park last month in which a total of 134 wild animals perished.
The veld fire, according to her, killed 25 black rhinoceros, 5 white rhinoceros, 11 elephants, 60 giraffes, 30 kudus and three lions.
The estimated monetary loss was N$18,6m. Nandi-Ndaitwah said the fire started at Farm Success, located south of Etosha National Park and spread through a number of nearby farms before it entered Etosha on the evening of 22 September and continued in a north-easterly direction.
“The cause of the fire is suspected to have been started by charcoal production on Farm Success,’ she said, adding that it was possible that many other smaller species may have also been affected by the fire.
She said the veld fire was extremely difficult to fight due to the heavy fuel load of dry grass and strong wind.
Despite joint efforts by the Ministry's staff and the staff of the Ministry of Defence at Oshivelo Defence School, the fire burnt for four days before it was finally put off on 25 September.
The burnt area covers the south and east areas of Halali Camp up to the Kalkheuwel waterhole. “The burnt areas were surveyed through a helicopter and two fixed wings aircrafts to determine the extent of animal mortalities. The mortalities were particularly severe as animals were trapped in the fire and could not escape,” Nandi-Ndaitwah briefed the media.
She called on charcoal producers to take necessary precautionary measures to prevent fires resulting from their operations. The Minister also informed the media that she was informed that there was a fire in the Namib Naukluft Park, that was started by a lightning on 7 October and burnt in the areas of Ganab and Solitaire. “I am happy to note that the fire was stopped and no wildlife mortalities reported," she said.
While veld fires are important elements of the savannah ecosystems such as that of Etosha National Park as they play a role in maintaining the savannah structure – preventing bush encroachment and opening up systems for other species, necessary measures are needed to manage and deal with such fires so as to minimize and prevent losses of high value species such as elephants, rhinos and lions.

Articles in this Category